Teladoc Health (NYSE:TDOC) stock has been experiencing a bloodbath for much of the year, losing over 50% of its value since February, when it soared as high as $308 per share. The company has even attracted a dedicated community of short-sellers despite releasing spectacular growth results quarter after quarter. As a result, about 12.5% of the float is sold short.

Skeptics see a grim future for the company as the pandemic wraps up and patients return to in-clinic visits. Should you be concerned about all the fear, uncertainty, and doubt surrounding Teladoc? 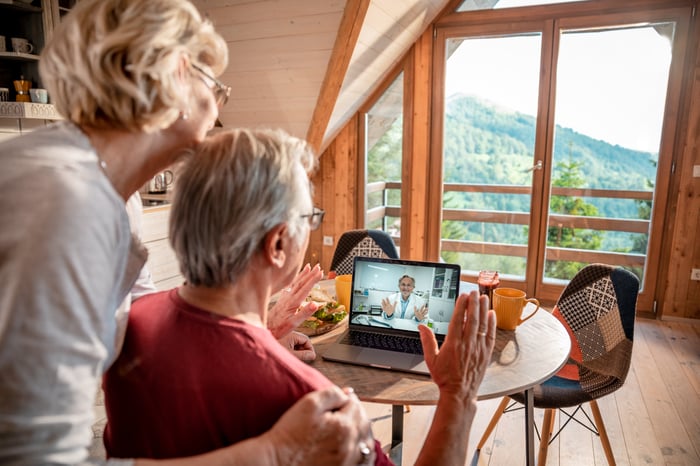 At first glance, the bears seem to have a point: Telemedicine utilization is down 37% from pandemic highs. However, it is still 38 times higher than before COVID-19, and the numbers have stabilized.

During the second quarter of 2021, Teladocs total members remained roughly unchanged year over year at 52 million. Nevertheless, the company grew its revenue by 109% over the prior years quarter to $503 million. This was largely due to an increase in platform utilization rates, which soared from 16% to 21.5%. It costs $12.95 per month to enroll in Teladocs health program, and not all members seek consultations during the year.

Its subsidiary Livongo, which runs a digital health app that improves disease management for people with diabetes, performed remarkably. It added more than 200,000 members in the same period for a total of 715,000. Patient satisfaction remains high across both Teladoc and Livongo. The two apps are both rated 4.8 out of 5 stars by close to 340,000 reviewers on the Apple App Store.

Recent surveys have shown that patients who utilize telehealth tend to have acute, low-intensity conditions that often resolve on their own, or are seeking treatment for chronic conditions. All this falls right into Teladocs expertise. In addition to primary care, Teladoc offers a telepsychiatry platform, treating various conditions including anxiety, depression, and relationship conflicts. Seventy-six percent of patients report feeling better after their consultation, according to the company.

Moving forward, its enterprise healthcare solutions will become one of two major catalysts for growth. More than 40% of Fortune 500 companies use Teladoc for their employees as part of health insurance packages.  The service has an ample value proposition, as online consultations are far cheaper than in-person ones overall.

The other area in which Teladoc could expand is telepharmacy. The company currently does not dispense drugs on its platform; its focused on achieving growth in consultations and chronic disease management. But both of those services would synergize very well with the idea of becoming a telepharmacy, as that setup would allow in-house physicians to prescribe medications through a national fulfillment center, instead of requiring individual pharmacies to get involved after visits.

In my opinion, its not the companys increase in total visits, utilization rate, or revenue investors should be excited about. Its profitability. During the quarter, Teladoc generated $39.56 million in free cash flow -- its highest in history. Many old-school investors shunned Teladoc for its lack of profitability over the years, questioning how it could keep ramping up its physicians pay to grow users and break even doing so. But happily, a sharp increase in utilization solved that problem.  This should settle the question for the time being.

All things considered, I expect Teladoc to sustain its growth through integration and expansion into just about every medical field suitable for telehealth. It is a solid healthcare stock to buy on the dip even at 11.5 times forward revenue. Thats higher than the sector average, but the company has earned it, boasting a higher revenue growth rate than competitors including Amwell and Ontrak.

This article represents the opinion of the writer, who may disagree with the “official” recommendation position of a Motley Fool premium advisory service. We’re motley! Questioning an investing thesis -- even one of our own -- helps us all think critically about investing and make decisions that help us become smarter, happier, and richer.

Cumulative Growth of a $10,000 Investment in Stock Advisor Calculated by Time-Weighted Return